Is a Golden Era of Fast Food Upon Us?

POTBELLY SANDWICH SHOP
Potbelly has plans to reach 2,000 restaurants over the next decade.

Don’t look now, but the big are getting bigger. Of the top 10 chains in the QSR 50 report, only two—McDonald’s and Subway—saw their unit count drop from 2020 to 2021, while the other eight added 1,116 units, or roughly the size of the entire 47-state Firehouse Subs enterprise.

Given what the nation endured over recent years, such results seem counterintuitive, even odd. After all, a global health pandemic shuttered dining rooms, worker shortages sent restaurants scrambling for help and altering hours of operation, rising food and equipment costs drained profitability, and consumer habits shifted quickly and dramatically. It would be reasonable to expect some contraction, or at least a cautious approach to development and the future.

Well, it didn’t seem to matter much to quick-serve’s powerbrokers as COVID-19 accelerated existing trends and industry giants further entrenched themselves into American lives. Among the entire QSR 50, Jersey Mike’s, Domino’s, and Taco Bell all added at least 200 restaurants. Nine more tacked on at least 100 locations.

In the five years before the pandemic, David Portalatin, the NPD Group’s foodservice industry adviser, says off-premises occasions were up, on-premises dining was falling, and quick serves and fast casuals were consistently gobbling up share from their full-service peers. The pandemic accelerated that pace as consumers flocked to quick serves—with their drive-thrus, mobile apps, and bundle deals—for safe, convenient, value-driven offerings.

“Quick serves were at the intersection of what the consumer needed at a disruptive time, offering the right mix of quality and value, so it shouldn’t surprise that we saw a significant increase in the flow of money into the segment,” Portalatin says.

Already present, powerful forces on the American landscape, quick-service restaurants became even more present and more powerful, unlocking an energizing new era in the industry that has many predicting, anticipating, and planning for an appetizing future.

Have we been here before?

The present day’s good vibes harken back to what many consider the golden age of fast food: the 1980s, when Baby Boomers, fueled by a massive expansion in disposable income and two-income households, began outsourcing meal preparation en masse to accommodate their busier lives. As a result, restaurant traffic surged year after year and quick-service chains expanded their footprint across the American landscape with new restaurants. McDonald’s, in fact, added 5,415 new restaurants throughout the decade—or one new restaurant every 16 hours.

So, might we be in another golden age? It certainly seems the sector is headed there.

After opening 55 new U.S locations in 2021, KFC sat on the positive side of unit growth for the first time since MySpace was the world’s largest social networking site. KFC chief development officer Brian Cahoe told QSR earlier this year that the chain, which is also riding eight consecutive years of positive same-store sales, would repeat the positive store count feat in 2022 as well.

Three years ago, KFC rival Popeyes grabbed national headlines and emerged a social media favorite when it debuted its chicken sandwich to loud fanfare and long lines. And the momentum hasn’t slowed. AUVs at Popeyes have grown from $1.4 million in 2019 to $1.8 million at the close of 2021, while the chain opened 208 locations in the U.S. and Canada in 2021.

“And we’re on track to open another 200-plus this year,” Popeyes president Sami Siddiqui says.

Chipotle, long a fast-casual darling, saw its total revenue jump 26 percent in 2021 to $7.5 billion while comparable restaurant sales increased 19 percent and the chain opened some 200 new restaurants to hit the doorstep of 3,000 domestic locations.

Just two years ago, Potbelly was on the verge of bankruptcy and talk of closing upward of 100 restaurants swirled around the Chicago-based company.

Those days have passed and the sandwich-slinging, milk shake-making brand is on the rebound, showing just how lively the quick-service category is these days for players with a focused plan.

In 2022’s opening quarter, Potbelly recorded its fourth consecutive period of same-store sales gains and reported positive traffic across all three months of the quarter. The chain’s so-called CBD (central business district) shops led the way with sales up 64 percent over the first quarter of 2021. Meanwhile, Potbelly’s AUVs, long hovering around $1 million, are now pacing at $1.1 million and leadership considers $1.3 million a reasonable AUV target in the coming years.

“Whether it’s the suburbs, our drive-thrus, or other locations, we’re not seeing any lack of momentum,” Potbelly CEO Bob Wright says. 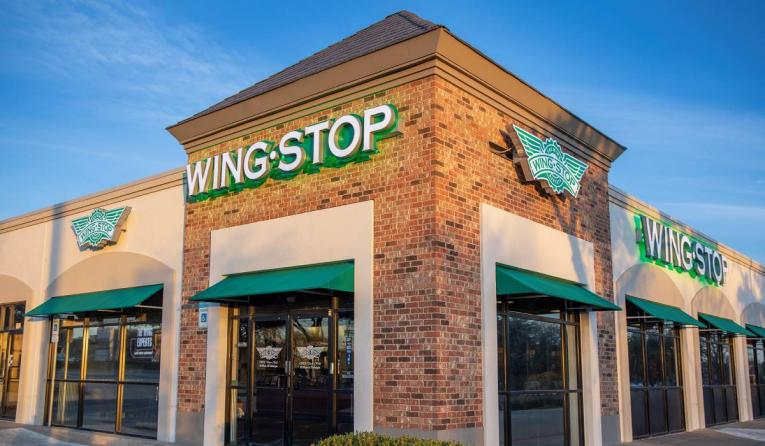 Wingstop believes it can become a top 10 global restaurant brand with 100 percent digital transactions, AUVs over $2 million, and more than 7,000 worldwide restaurants.

Momentum. The quick-service industry holds it right now and it continues inspiring some bold, ambitious plans—and thoughts that contemporary times might indeed rival the 1980s as the golden era of fast food.

Papa Johns has touted plans to add as many as 1,800 units over the next three years.

Raising Cane’s entered 2022 with fewer than 600 units. The Louisiana-based chain expects to close the year with more than 700, including restaurants across 10 new markets.

“With the momentum that we’re experiencing at Wingstop, I would agree that we’re in a golden era of fast food that isn’t slowing,” Skipworth says, adding his brand is “primed for long-term success” thanks to a proven model sitting alongside a strong digital and delivery strategy.

Chipotle previously estimated it could operate about 6,000 North American restaurants. Now, the chain is projecting 7,000 units.

“We are building a real estate pipeline that will allow us to accelerate new unit growth to be in the range of 8-10 percent per year, with greater than 80 percent of new restaurants having a Chipotlane,” says Scott Boatwright, chief restaurant officer at Chipotle.

Even Houston-based Shipley Do-Nuts, a well-respected-but-not-yet-national-name, foresees doubling its unit count to 700 over the next five years.

Consider Popeyes as one case. Celebrating its 50th anniversary in 2022, Popeyes is unabashedly, unapologetically, and unrelentingly focused on growth and feeding consumers’ intensifying embrace of value, convenience, and tasty food to create a bigger brand footprint.

“Right now, guests can’t have Popeyes wherever they want it, so we have a huge runway with how many more restaurants we can open in the U.S. & Canada,” Siddiqui says.

Over the next five years, Siddiqui wants to further elevate the guest experience and achieve operational excellence, leaning on enthusiastic franchisees, innovative products, and relevant technology to drive performance in the U.S. and abroad. The company is testing new restaurant formats oriented to digital-only orders, including ghost kitchens, and strengthening third-party and digital partnerships to enhance access for customers.

“That’s what will take us to the next level,” Siddiqui says.

Despite the existence of some pesky market challenges, Siddiqui says the quick-service model has shown itself to be “tried and true” and proven its resiliency. By and large, the industry navigated headwinds like the pandemic and supply chain disruptions and adapted to consumer needs in real-time by pivoting much of their business to drive-thrus, delivery, and contactless options. Such swift changes deepened quick serves’ relationships with consumers and helped elevate Popeyes and so many of its quick-service siblings in the eyes of consumers.

“Ultimately, if you listen to the evolving needs of your guests and ensure your team members are taken care of, then your restaurants will be better equipped to navigate and prosper through times of uncertainty,” Siddiqui says. 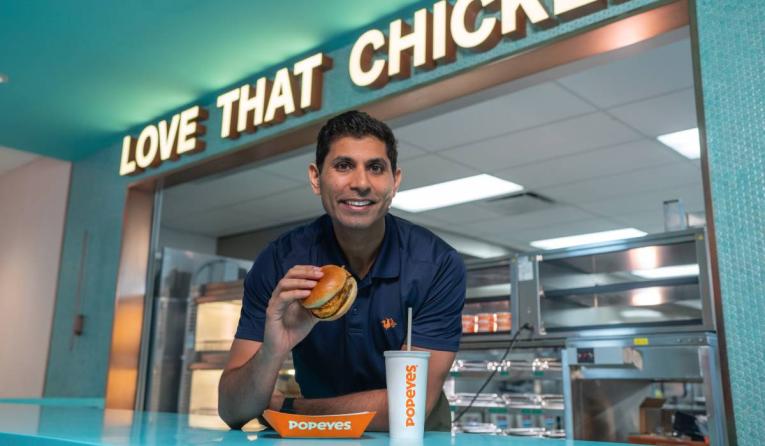 “Ultimately, if you listen to the evolving needs of your guests and ensure your team members are taken care of, then your restaurants will be better equipped to navigate and prosper through times of uncertainty,” Popeyes brand president Sami Siddiqui says.

Another golden age? Why not?

To be certain, inflation, supply chain, and labor issues continue pelting the restaurant marketplace, while there is reasonable concern that elevated pricing will stall the quick-service industry’s freakishly fast pace. Still, those headwinds are not enough to silence the overwhelming optimism among many major quick-service players, especially as restaurant-loving millennials enter their peak earning years and domestic migration sparks fresh opportunities for new restaurant locations.

Many leading quick-serves are prepared to pounce on current opportunities, largely by making relevant investments in technology, store design, and the customer experience to ensure they are productivity-minded, responsive, and on-trend operations.

Boatwright says Chipotle will continue to benefit from large investments in its people and technology. In April, the company announced a $50 million venture fund called Cultivate Next, which will make early stage investments into companies that will help Chipotle enhance the experience of its guests and its employees. In addition, Chipotle will continue to test and invest in technology like Chippy, the company’s autonomous kitchen assistant that cooks tortilla chips, and radio-frequency identification (rfid) tools to trace and track ingredients in its restaurants. Such innovations promise to enhance the employee experience at Chipotle and boost productivity at the company’s restaurants.

“Brands that have a clear purpose, commitment to a great guest experience, and the ability to adapt to the evolving needs and behaviors of their guests will continue to win across all categories,” Boatwright says, adding Chipotle leadership’s next goal is to see AUVs travel well beyond $3 million. “Stronger restaurant-level economics combined with significant unit growth should allow us to optimize earnings power for years to come.”

Wingstop, meanwhile, has seen its digital database of customers surpass 28 million users and international development swell, a sign that fast food’s ambitious prospects extend beyond U.S. borders. The first of 100 planned Wingstop restaurants in Canada opened earlier this year while an expanded development agreement in Indonesia will double Wingstop’s presence in that nation to more than 100 units.

“Our optimistic outlook comes down to growth in our development pipeline, whitespace in existing target trade areas, and the potential for restaurants in new target trade areas,” Skipworth says, adding that Wingstop could add as many as 220 locations this year alone.

To prepare for its enterprising growth plans, Wingstop is exploring options to take more control over its supply chain, investing $40–50 million into its tech stack over the next five years, and prioritizing its product innovation, highlighted by the ongoing test of 11 different chicken sandwiches.

“It is truly an exciting time to be a part of Wingstop,” Skipworth says.

At Potbelly, Wright attributes the company’s positive growth to surging digital business—two out of every five Potbelly orders in 2022’s first quarter were digital—a re-engineered menu that heightened Potbelly’s value proposition, and a modernized tech stack led by a new website, a new mobile app, and a redeveloped loyalty program.

“Those are all reasons we’ve moved from survival to turnaround and are optimistic about what lies ahead,” Wright says.

And just what lies ahead for Potbelly, which today boasts about 450 units across 33 states? How about reaching 2,000 restaurants over the next decade?

A once-unthinkable proposition just two years ago suddenly doesn’t seem so wild given the brand’s comeback amid a greater quick-service surge. Of late, Potbelly has entered Las Vegas and Tampa and Wright sees compelling opportunity for Potbelly to open new markets while simultaneously deepening its penetration into existing ones as well.

“Growth is the best part of chain restaurants,” says Wright, a 35-year veteran of the restaurant industry. “When you have new franchisees, people moving up and getting promoted, and new stores opening, it creates more opportunities. And there’s nothing like growing and winning in this industry.”

Daniel P. Smith | Is a Golden Era of Fast Food Upon Us? | QSRmagazine.com